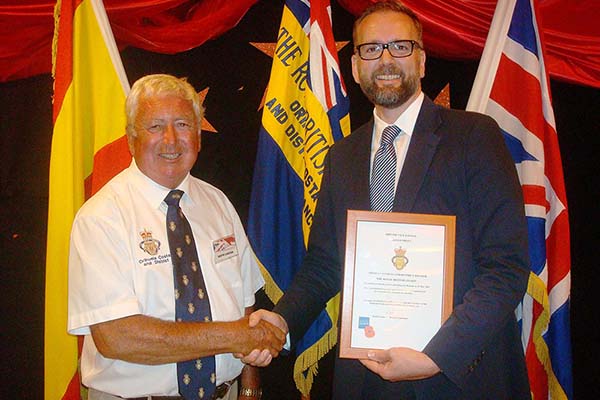 VICE CONSUL ON PARADE IN THE ORIHUELA COSTA

Lloyd Milen was the guest speaker at the May meeting of the Orihuela Costa Branch of the Royal British Legion held in Mil Palmeras last Thursday evening. Lloyd is, of course, the Vice Consul, at the British Consulate in Alicante.

Rather fittingly, although the arrangement had been made some weeks ago, Lloyd had recently assumed the role of RBL (District North Spain) President and his visit to the Orihuela Costa was his first to a local branch since assuming the appointment.

However, his presentation to the members focused very much on the role played by the British Consulate in this part of Spain. He spoke of how the Consulate already works closely with the RBL, dealing with those British nationals in need of Legion help and support. He also spoke of his contact within the much wider Spanish Community and how he is continually meeting with Mayors, Councillors and Officials in an effort to promote the integration in Spain of the 160,000 British Nationals registered on local padron’s.

He refused to be drawn on questions relating to the forthcoming referendum on EU Membership, and what might happen should the UK pull out, saying that it really was uncharted territory, but he confirmed that governmental policy was very much that the country remains within the Union, albeit on rather different terms.

Following his lecture Branch Chairman Keith Carter thanked Lloyd for attending the meeting and concluded by presenting the new President with a Branch Certificate of Appreciation.