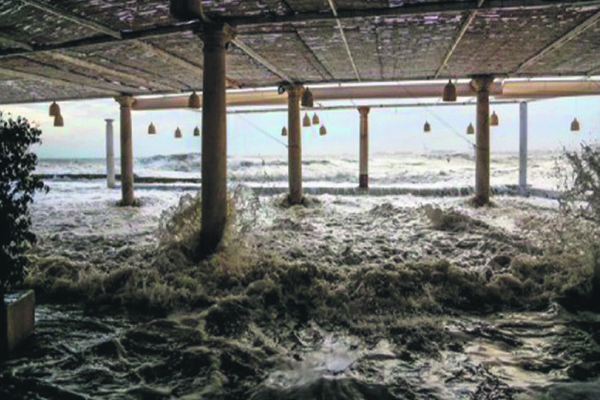 Six and a half metre waves battered the southern coast over the weekend in the worst storm to hit the region in 20 years and more is to come.

Spain’s national weather agency has issued a country-wide alert for torrential rain, after fierce storms battered the country over the weekend. The severe weather will last at least into Tuesday, November 3rd, Aemet confirmed in a statement on its website.

Spain currently has 29 provinces on alert for heavy rain, with the worst affected areas including Andalusia, the Pyrenees and the Mediterranean coast.

Much of Spain was inundated with rain over the weekend, with the south of the country being particularly badly hit. Beach bars were destroyed and seafront promenades flooded all along the Malaga coast, while in Andalusia there were 300 incidents due to the bad weather. Flights both in and out of Malaga airport were delayed on Sunday.

A storm of this ferocity has not been recorded in Spain since 1995, according to various Spanish media reports.

“In the 33 years I’ve been working here I’ve never seen anything like it,” Salvador García, from Las Acacias restaurant in Malaga told regional newspaper, Diario Sur.

Spain’s national weather agency, Aemet, issued an alert on Monday, warning of torrential rain across the country that would last into Tuesday, November 3rd. It warned that there was currently a strong depression sweeping from the Atlantic from the south east of the county