Ten people in total have died in Spain in the regions of Andalusia and Murcia due to flash flooding brought on by downpours. The heavy rains have also damaged homes, caused the collapse of two bridges and forced roads to close.
A tornado swept through a fairground in the main square of Gandia in Valencia province, knocking down a Ferris wheel and injuring 35 people.
A collapsed bridge on the A7 motorway is seen near Lorca, Murcia (pictured). 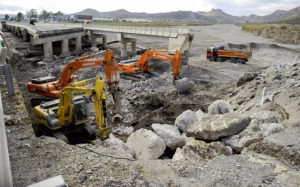