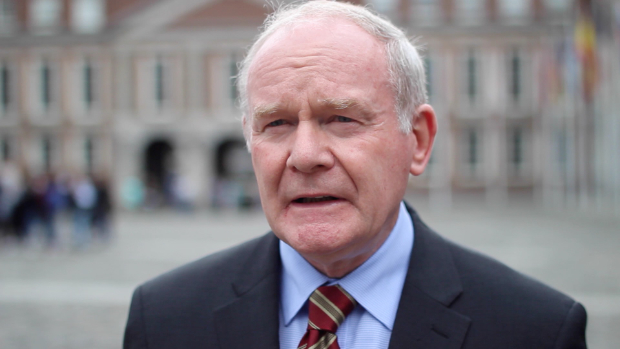 Mr McGuinness resigned as Deputy First Minister in January after a decade in the power sharing role with the Democratic Unionists which helped to end 30 years of conflict in the country.

A statement from his Sinn Fein party said he died on Tuesday in Londonderry following a short illness.

He was diagnosed with a rare heart condition at the end of last year, and died in hospital in his hometown surrounded by his family.

Sinn Fein President Gerry Adams said: “Throughout his life Martin showed great determination, dignity and humility and it was no different during his short illness.

“He was a passionate republican who worked tirelessly for peace and reconciliation and for the re-unification of this country. But above all he loved his family and the people of Derry and he was immensely proud of both.”

Democratic Unionist Party (DUP) leader Arlene Foster said his death “will come as a shock to many people”.

Mr McGuinness was at the IRA’s top table for years but turned peacemaker and was pivotal in securing the Good Friday Agreement in 1998 and the Queen even agreed to meet him and shake his hand in 2012 even though he was believed to have helped order the murder of her cousin Lord Moutbatten in 1979.
The former deputy first minister looked frail as he quit politics in January while battling rare genetic disease amyloidosis and died in hospital in Londonderry last night.
Today his friend and comrade Gerry Adams called him a ‘hero’ in tributes and Theresa May said: ‘While I can never condone the path he took in the earlier part of his life he played a defining role in leading the Republican movement away from violence’.