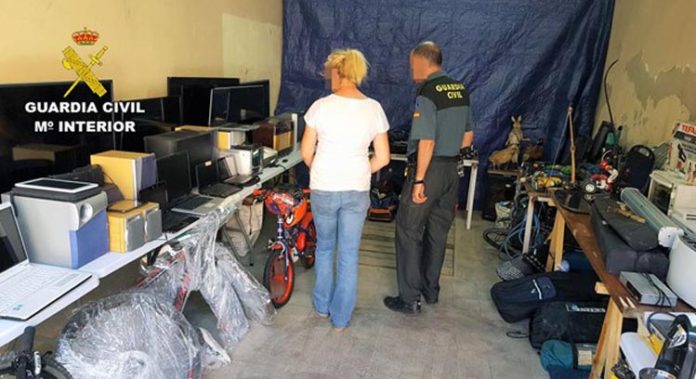 A GANG of three believed of being behind a series of over 80 burglaries in Lorca, Águilas and Puerto Lumbreras have been captured. Officers of the Guardia Civil arrested the suspects in Mazarrón where it’s believed they’d established the base of their criminal operations.

Police first began their ‘Operation Connect’ back in September 2016 when they noticed an increase of violent burglaries in the Alto Guadalentín area which had a similar pattern when the reports were analysed. This included how the burglaries took place and the same items being stolen on each occasion.

The targets always appeared to be isolated houses away from the town to avoid raising any suspicions from neighbours and always made their escape on foot.

Most of the victims were either away on their holidays, especially at weekends, and many other homes were attacked in the early hours of the morning when they were attending local fiestas. The suggestion is that the gang had kept watched on their intended victims for some time to establish their own habits.

Once the house was empty, they would jump over the wall and once inside the grounds would search for a window which was easy to open and at the same time hidden from general view. With nobody close by and able to hear the noise, they had no problem breaking through the metal grills, often pulling them out of the brickwork. Once inside the homes they worked quickly stealing things easy to carry, such as small televisions, tablets, smartphones, jewellery and cash.

If the opportunity presented itself they would also take the car keys from the house to steal the parked car and then use the vehicle to commit further burglaries before abandoning the car miles away.

After several months of investigation, and thanks to collaboration from neighbours and the Local Police forces from Lorca and Águilas, they discovered Mazarrón as their base. Following raids on two properties in the area, they found hidden hoards of the stolen goods and stumbled upon much more…

During the searches the Guardia Civil found a selection of small arms with detonators alongside 1.6kilos of hashish.

So far the three detained have been charged with the crimes of violent theft, illicit ownership of firearms, drug trafficking and belonging to a criminal organisation.