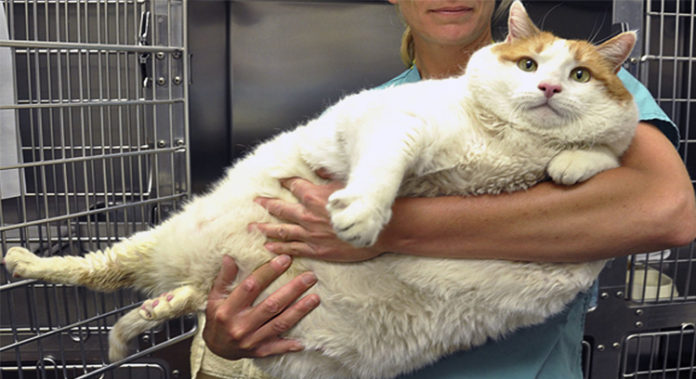 A NEW study has found more than half of British pet owners let their cats and dogs pig out on chips, popcorn, cheese, pizza, curry and even cake.

2,000 pet owners were surveyed as part of the study and the findings reveal that others admit feeding their animals high calorie foods including rice and bread.

Worryingly, 4% even confessed that they give their pets chocolate, which is poisonous to cats and dogs and can result in shaking, vomiting and seizures.

The poll, from Animalfriends.co.uk showed that 14% of British cats and dogs are currently overweight – making a whopping 2.2 million animals. Of those, three quarters have an overweight owner.

And that’s not surprising as a quarter of owners claim they regularly dish up their leftover dinner scraps for their cuddly companions.

One in five furry friends are being given a snack because they beg for them, while one in four give snacks to pets between meals.

In 2015, the PDSA released an Animal Welfare report which estimated that by 2020, obese animals would be more common than healthy ones.

According to the results, the average pet owner spends £21.74 a month feeding their pet; while almost one in five splash out over £40.

Dave Leicester, head of clinical intelligence at pet emergency experts Vets Now, said: “The results of this poll are very concerning. Pets should never be given toxic foods such as chocolate. We see thousands of cases of chocolate poisoning a year and, in rare cases, dogs do not survive.

“Owners should also avoid giving their pets human foods which can be high in fat, salt or sugar, and especially take-away and processed food with hidden toxins like onion or garlic powder and the artificial sweetener xylitol. High fat or sugary foods can lead to obesity which, in turn, have been linked to heart disease, cancer and diabetes, as well as debilitating life-limiting conditions including joint problems and respiratory problems.

“Too many pet owners remain unaware of the huge risk of feeding their pets unhealthy and dangerous foods. This needs to change.”

Westley Pearson, Managing Director at AnimalFriends.co.uk, said: “Many of the foods we eat contain things like natural flavourings. These can make your pet extremely nauseous. Salt, raisins, garlic and onions are just a few of the everyday items we eat without question, but could cause significant harm to your pet.

“Frequent feeding on this type of high fat, salt and sugar diet could result in numerous health problems, such as obesity and diabetes.”